Amanada Ratcliffe aka. 'AmandaShootsBands' is a music scene photographer who describes her work process as a bond of trust between herself and the artists she captures. Amanda talked to Progear about her early work in music reviews, The difference between shooting live music vs behind the scenes settings and how sharing issues with other artists helps to deal with stress. Tell us a bit about yourself and what you usually photograph.
I’m a New Zealand based photographer specialising in live music and behind the scenes imagery. You’ll find everything else you need to know in this interview.

How did you get started?

It was initially a Living End concert at The Studio (Auckland) in 2006 that got me thinking about becoming a concert photographer.

I noticed a guy in the pit shooting the band, and I remember thinking how much I wanted to be in his place so I could have photos of my favourite musicians - the perfect souvenir!

I had taken my Olympus mju ii and saved the last shot on my roll of Kodak 400 ISO film for Chris Cheney’s jump off the drum kit at the end of the show, and I got it!
From my spot up the front in the crowd. This was it – I had found my calling!

That was twelve years ago - the days of dial-up and Myspace. The golden years. Digital cameras were really only just becoming more readily available, and New Zealand music websites were a little more about articles and reviews rather than the imagery.

Because of this, I found myself writing reviews to go alongside my photos that had been shot on a newly purchased entry-level FujiFilm camera. I always found it challenging to write about the shows after late-ass nights, but it was the only way to get my images online, so I did it. The upside is that I now have a decent collection of set-lists, which had assisted my reviews at the time. A nice wee bonus!

It was about 2009-10 where websites started to accept photographers and reviewers separately, which was an incredible help and meant that I could put all the focus into building my brand and what I loved doing - shooting shows.

From there I made myself available to the main NZ based music websites, which eventually resulted in my becoming a staff photographer at Rip it Up Magazine. While the magazine is no more, I credit it for many of the contacts I still work with today. 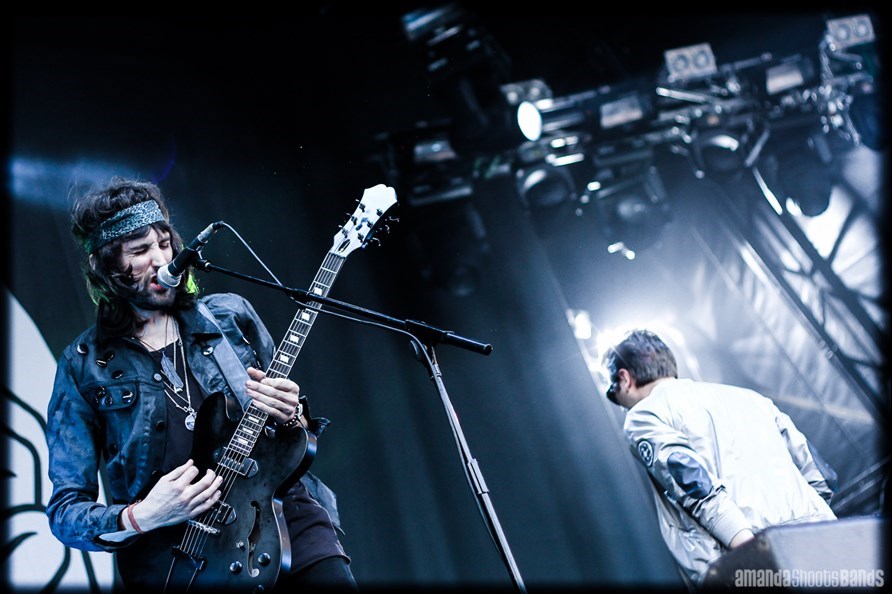 What was the first gig you photographed? Are they (The musician/s) still around?

The first official gig I photographed where the images were published online was Pluto at The Brownzy (Auckland) in 2007. Think purple and UV lighting with excessive smoke machine usage and you’re there.

While I don’t think Pluto are making music as a band anymore, I do know that the majority of the members are still working on separate projects with other professional artists. I’ve enjoyed seeing them over the years at different events, and it always takes me back to when I was starting out. It’s a good feeling.

Music photography is potentially a hard game to break into. How did you break through and how do you manage, maintain and form new relationships that allow you to stay in the scene?

As far as breaking through goes - it really was just about doing what it took to get where I wanted to be. Sometimes that meant that I had to do things I wasn’t keen on - like the review writing, but I knew that it was going to help me in the long run so I just got on with it.

For the managing, maintaining and forming new relationships side, the main thing I can say that has helped me along the way has been to stay true to myself as far as personality and style goes. You’ll always find ‘your people’ and the ones you want to work with that way. They’ll always respect you, your work, and your choices and in turn there’s a lot less stress for both parties.

And a simple quote from one of my favourite makeup ladies - Bobbi Brown - Just be nice to people. It helps. 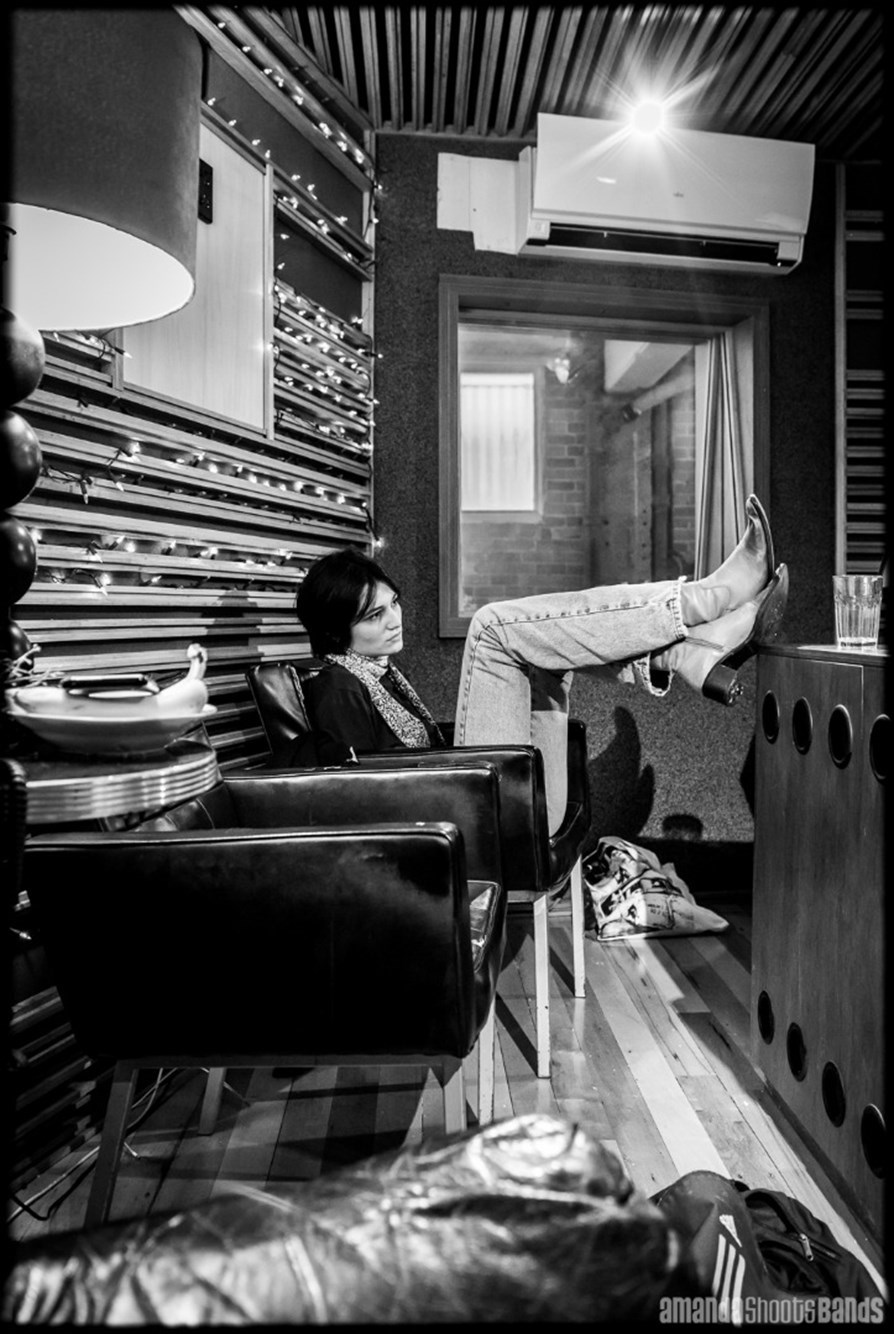 You have a great mix of shots featuring live energy along with documentary style downtime. Talk about the differences in shooting these scenarios.

They are sooo different!
Shooting live events - especially the larger scale international shows, you generally get the first three songs from the pit. That already puts a bit of pressure on the situation, and pumps up the adrenaline - at least that’s what it does for me!

Usually you’ll be sharing the photo pit with between 5-8 other photographers, so along with being focused on the band, you’ve also got to keep yourself from getting in the way of others.

There’s a lot to think about - lighting, angles, the music and your timing, but it is a tonne of fun and I always come away having learned something new whether that be about the band, the photography or myself.

Documentary photography can vary quite a lot. I’ve found that shooting recording studios, song-writing sessions and sound-checks can be stressful for the artists, seeing as you’re capturing them in completely different state to how they appear on stage.

Like anyone, they want to look good and to come across as the best version of themselves, so the trust between yourself and the musician is so important.

If you don’t have that it will probably show in your images…not ideal.

You do a mix of black and white and colour. What compels you to use one or the other?

Generally I prefer the majority of my work to be in black and white because it feels timeless and classic. Other than the fashion, those images could have been taken today or years ago, and I love that.

If my photographs are displayed in colour, it’s usually because the original shot was so vibrant and joyous that that’s what makes it outstanding and demands attention. 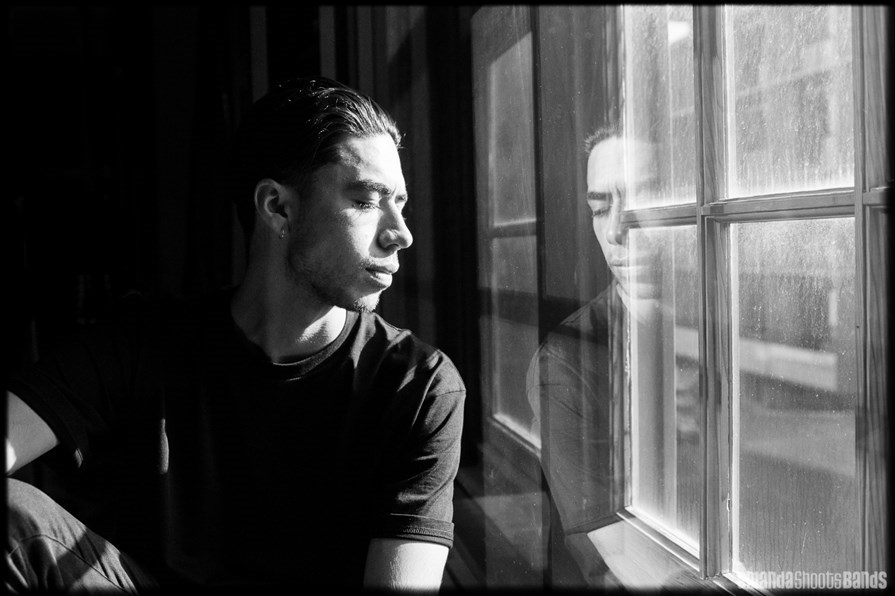 What are some of the day-to-day challenges you face that are unique to shooting musicians.

This makes me think about the situations where I am shooting in recording studios, or in more intimate settings where artists are writing new music.

I’m most in my element in this kind of set-up, but am also aware of how sensitive things can be, and how vulnerable they may feel.

There’s a lot of trust that goes between an ‘outsider’ and a musician, so I can see that could be a challenge to ensure that that confidence is there from the get go.

The mysteries and powers of the universe..! 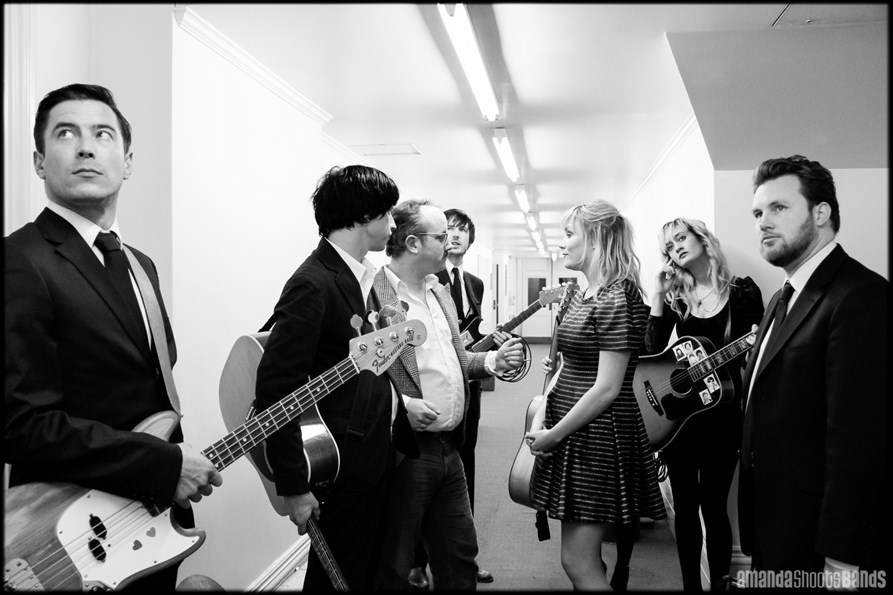 Are there other avenues of photography you practise outside of music?

I really enjoy street photography - mainly overseas. For some reason I feel like a bit of a dickhead shooting with my SLR on the streets in my own town / country, but overseas I am completely in my element.

I’ve also been into street-art and graffiti for years, and have recently shot a couple of festivals documenting the process and featuring the artists, which has been awesome. It’s given me the chance to get to know people who I might not have connected with otherwise, and learn some of the challenges that they face in their creative field. Really, we’re all the same but it’s nice to have that assurance.

Do people in the music industry try to pay you in things other than cash?

There are a few ways that come to mind which I’m certain other music photographers will be familiar with no matter where they’re based in the world:

I think my lack of enthusiasm toward these three options gives you an idea of the preferred payment here. 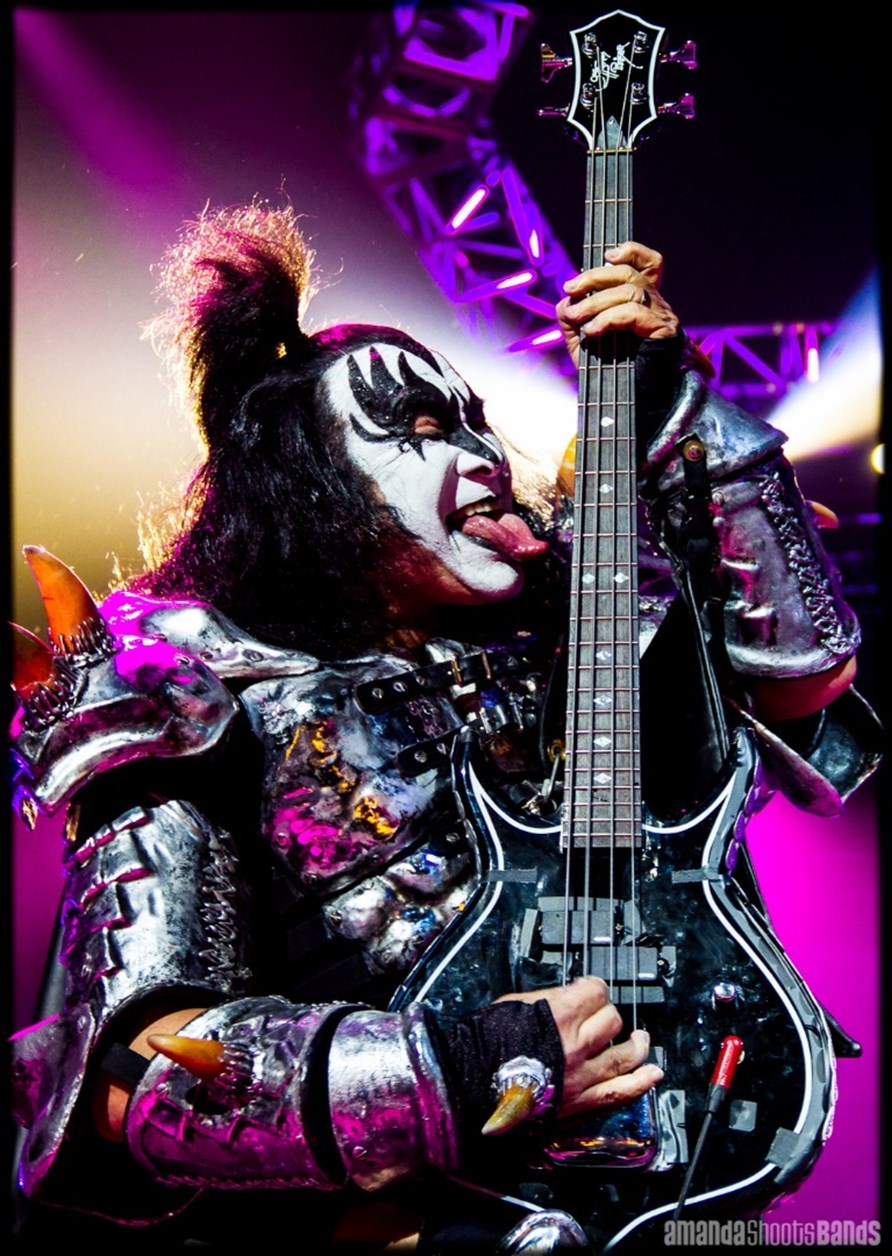 What are some of the different shooting techniques you experiment with?

My style is pretty classic, so I generally stay true to that.

I’m more about what I can do with what I’m given, so I’ll work a lot with reflections, available light and using objects like cables or stands to frame a shot. I enjoy the creative process ‘on the job’ rather than through editing.

One of my best examples of this way of working is the shot of Chelsea Jade.

That image was taken at Roundhead Studios and is actually her reflection in an ornate mirror, which was taken through some hanging chandeliers. It has had minimal editing, and I’m so proud of the way it turned out. Which part of photography do you like best ie. shooting, editing or something else?

This definitely changes all the time!

I skip between enjoying shooting, editing, working on my website / social media and planning upcoming shoots. It’s all fun and challenging, and once I’m in the zone I usually have a good time doing all of those things when I need to.

I’m feeling like the world is my oyster, and I’m so grateful to be able to experience that.

Being a working creative can be stressful. How do you keep your mind in the game?

I’ve found one of the best ways to keep my mind in the game is by talking to other artists, and realising that I’m not alone in feeling stressed out or struggling mentally.

Whether that’s done in person, over the phone or through messaging, this has helped me so much over the years, and is something that I’ve always enjoyed being a part of for other people as well.

I neeeeed decent sleep, which isn’t always easy with late nights and early mornings processing images, but in my down time, I like to make sure I’m taking care of myself in that regard. That doesn’t always work out though, and when it doesn’t I go down hill fast. I always regret it, and end up getting some weird ailment, but that results in me looking like a bit of a rockstar myself, so it’s not all bad, I guess! 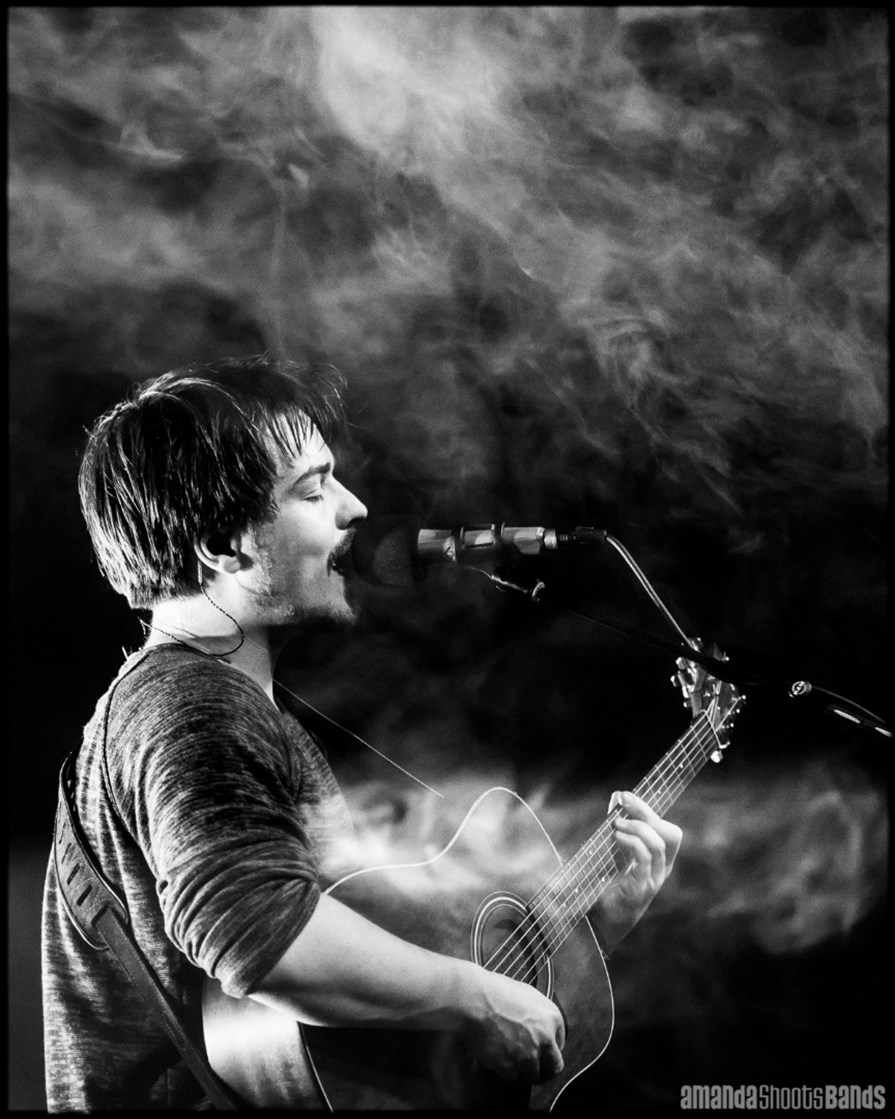 What creative things do you do outside of photography?

I like to write, but I definitely have to be in the mood for it. Usually it’ll be about random experiences, or things that I’ve learned in my life so far in an entertaining fashion.

That’s mainly for myself, but I wouldn’t mind putting some of those pieces out into the world in the future. It would be a shame not to. They are pretty funny.

Going on tour overseas with an international band.

I can’t give away too many details on that one, because I’m currently in the process of making this a reality, so keep an eye on my social media pages! How has photography influenced the way you fit into the world?

Music photography is an incredibly huge part of who I am, and I cannot imagine how my life would have turned out without it.

Before getting into it I was really shy, but I knew that I had some good stuff going on in my mind - I just needed a way to express and share that.

I am so thankful to have found a way to communicate with people through my work, and even though I’m rather fond of a great conversation and story telling session now, I love that my work can do a lot of the talking for me too. 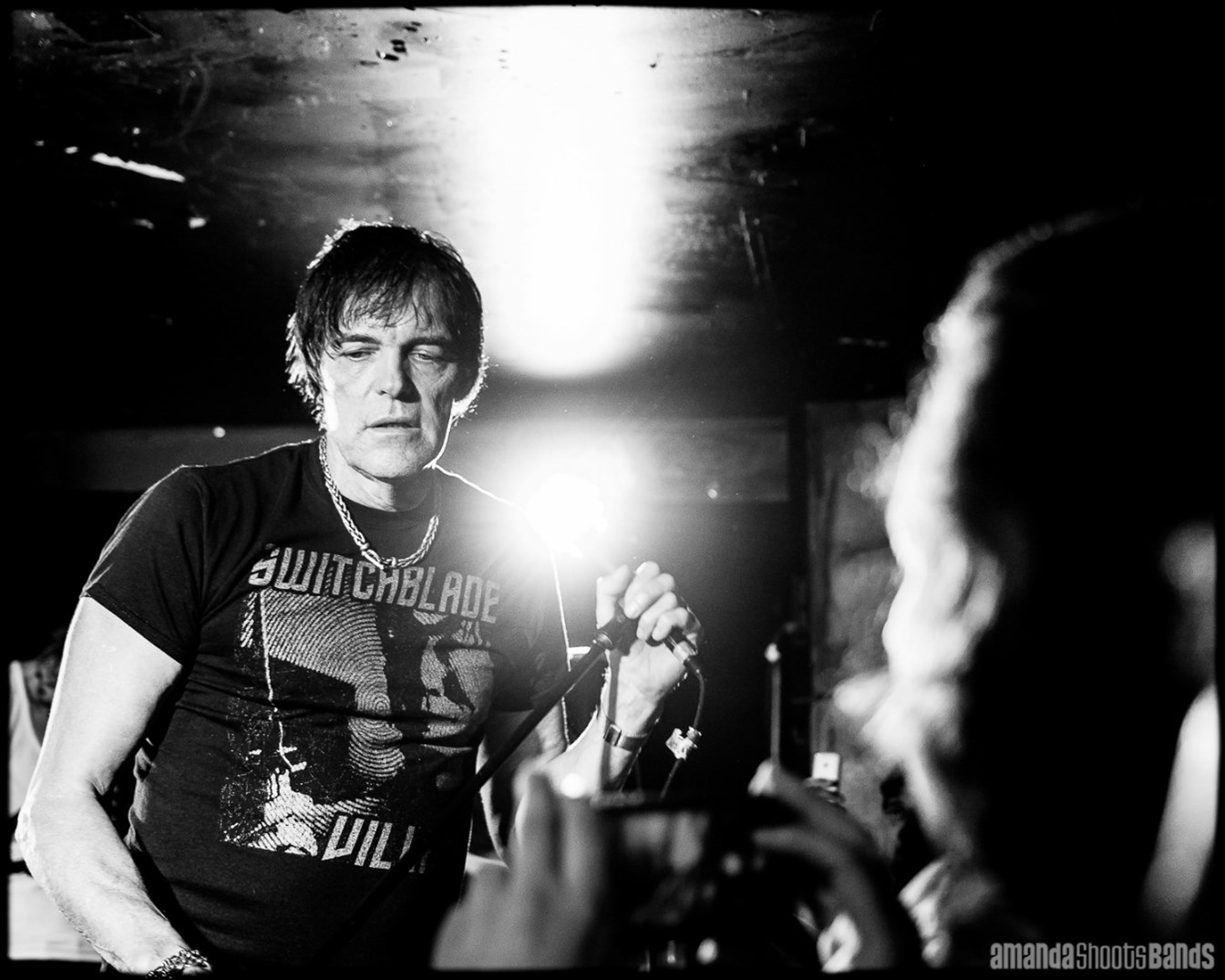 What gear do you shoot with and why?

I’m currently using the 7D MKII body because…well…that’s what I’ve got! The lenses work well with the body, and they’re great for the low light conditions that I’m usually faced with in concerts, backstage or recording studios.

Eventually I would like to go mirrorless, but my gear serves me well enough in the work I am doing for the moment.